Preventing & recovering from the destruction of cultural heritage: an overview of Dutch expertise

In the aftermath of the Notre Dame fire we explore what the Netherlands has to offer when it comes to protecting heritage and recovering from disaster.

It has been three months since a large fire ravaged through the Notre Dame Cathedral in Paris, causing significant damage and making the headlines around the world. Over 800 years old, this Gothic structure is one of the most visited sites in Paris and part of the Banks of the Seine UNESCO World Heritage Site. Its attributed historical importance and artistic value (not unrelated to its location in the capital of France) help explain why this incident caused reactions of shock and horror across peoples and countries.

But this was not a unique event. Indeed, there are many other “Notre Dames” around the world – historical structures and objects that are at risk, destroyed or partially damaged due to a myriad of reasons. From flooding to war, negligence to earthquakes, fire to looting, cultural heritage sites – whether museums, monuments, collections, historical buildings or archaeological sites – are prone to countless risks.

According to Koosje Spitz (Netherlands Commission for UNESCO), a monument goes up in flames almost every week in the Netherlands. In her article, she explains what the current situation in the country is when it comes to the protection and risk management of cultural heritage – unfortunately, and like many other contexts, the situation is far from satisfactory.

Nonetheless, there are several organisations, institutes and initiatives in the Netherlands that are working in the field of prevention and risk management, mitigating disasters and/or recovering from the (partial) destruction of cultural heritage, both on national and international levels. In the aftermath of the fire that ravaged through the Notre Dame Cathedral, this article looks at what the Netherlands has to offer when it comes to the protection of tangible cultural heritage and recovering from its destruction.

Cultural heritage is often threatened by different external and internal risks. In order to preserve and to use cultural heritage objects, collections or structures, one is required to be continuously aware of and manage numerous threats to prevent the loss of that heritage and its attributed value. Being responsible (together with other institutes) for the preservation of Dutch heritage, the Cultural Heritage Agency of the Netherlands (RCE) is well aware of this. The RCE implements policy, provides advice and develops knowledge in order to carry out its mission.

In the context of this article, two fields of expertise of the RCE are particularly relevant. The first is risk management for dealing with collections, a methodology which offers a practical and useful approach for comparing options and setting priorities for dealing with risks. Experts of the RCE wrote an openly accessible publication on the subject, in order to support the work of museum and collection managers. The second expertise is the 9-step approach for managing indoor climate risks in museums and historical buildings. This approach, thoroughly explained on the RCE’s website, helps museum and heritage practitioners identify and define the arguments in order to reduce indoor climate risks.

More information about these and other topics related to the RCE's expertise and experience of keeping heritage safe, can be found here (in Dutch). Besides these instruments, the RCE provides trainings and advice on these and other subjects related to heritage management and protection in the Netherlands and abroad, for example through its Shared Cultural Heritage programme. 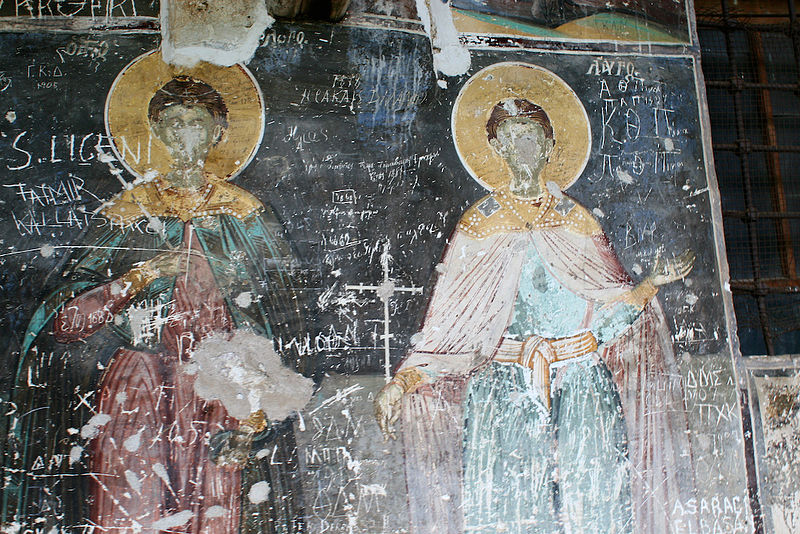 A fresco in Voskopoja, Albania, 6 June 2008 (photo: Ilmotorediricerca). In 2018, a group of 12 churches built during the 17th and 18th centuries in Voskopoja and Vithkuqi in south-eastern Albania were listed in the 7 Most Endangered programme of Europa Nostra.

On a research level, the Centre for Global Heritage and Development is an important institution in the Netherlands dealing with, amongst other research themes, Heritage under Threat. A collaboration between Leiden University, Delft University of Technology and Erasmus University Rotterdam, the Centre initiates, encourages and facilitates interdisciplinary research and education in the field of cultural heritage. The Heritage under Threat theme focuses on heritage and archaeology in situations of war, conflict and natural disaster and the issues facing heritage protection around the world. For example, its Scanning for Syria project has been creating 3D virtual reconstructions of archaeological objects lost in the Syrian war. And last year, the Centre launched a Massive Online Open Course (MOOC) on the topic of threatened heritage.

Another important aspect of preventing or minimising the destruction or loss of cultural heritage is raising awareness of its vulnerability. For that, Europa Nostra, a European-wide and Netherlands-based heritage organisation developed the 7 Most Endangered Programme. Launched in 2013, this programme identifies the most threatened monuments, sites and landscapes across Europe and mobilises public and private partners at different levels to identify a viable future for these heritage objects or sites.

With a comparable goal in mind, Europeana, another organisation with a European scope based in the Netherlands, has recently developed an online exhibition on Heritage at Risk. Using digital content from Europeana Collections, this online resource explores the many different threats to cultural heritage, from ancient times until today. One entire section is focused on the history of the Notre Dame and considers the role that digital technologies can play in the preservation and restoration of these historical and vulnerable monuments.

Both these European-wide organisations are based in the Hague, a city known internationally for its many European and international organisations, with its Peace Palace holding a central position. Thousands of people work in the Hague everyday towards building a more peaceful and just world, and towards finding solutions to global problems, including those related to cultural heritage. For instance, in 2016, the International Criminal Court in the Hague held the first trial that focused solely on cultural destruction as a war crime, against a jihadi leader accused of destroying ancient mausoleums in Timbuktu.

During and after disasters

On an international level, the Dutch government offers ample support to UNESCO for the protection of cultural heritage worldwide. For instance, the Ministry of Education, Culture and Science has recently financed the two-year secondment of Erik Kleijn to the Culture and Emergencies entity at the UNESCO headquarters in Paris. With many years of relevant experience, he is assisting the implementation of the 1954 Hague Convention and its Protocols for the protection of cultural property in the event of armed conflict. Some of the activities that the Armed Conflict and Heritage team carry out include organising workshops for national armed forces, such as in Georgia, Egypt and Lebanon, and developing education materials for military peacekeepers.

Last year, ICCROM (based in Italy) and the Prince Claus Fund (a Dutch cultural and development fund) published a much needed and innovative handbook and toolkit on First Aid to Cultural Heritage in Times of Crisis that is freely accessible online. This resource has multiple uses: it helps improve emergency preparedness within cultural heritage institutions, it serves as a reference to train others, and it acts as a step-by-step guide for planning and implementing coordinated cultural heritage first aid in the case of emergency situations and soon after disaster strikes. Besides the handbook and the toolkit, trainings are also provided (approximately once a year) for heritage practitioners in the field of first aid to cultural heritage in times of crisis (also known as FAC). 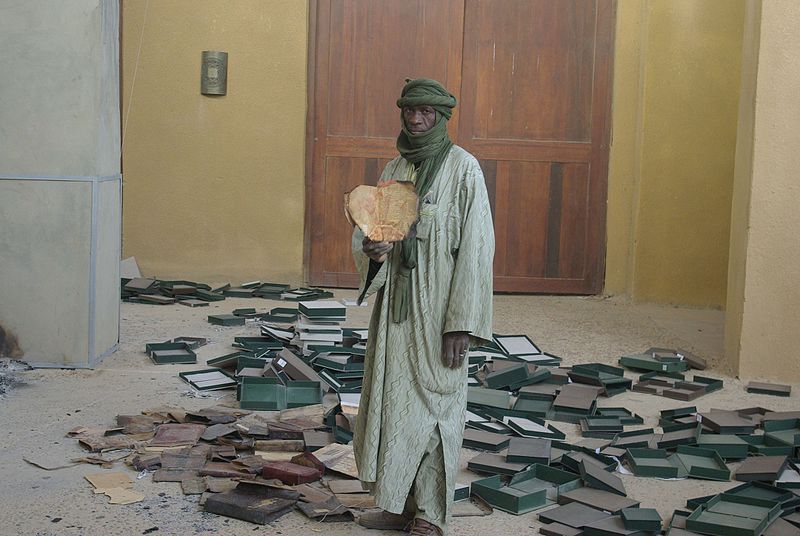 Man holding a burnt manuscript, IHERI-AB, Timbuktu, 31 January 2013 (photo: UNESCO Bureau of Mali). The armed conflict and occupation of Northern Mali that took place between 2012 and 2013 led to significant damage to the country’s cultural heritage, as armed groups looted or destroyed more than 4,000 ancient manuscripts. A secret operation, which started with the support of the Prince Claus Fund, was organised to prevent further destruction of these manuscripts.

For those working primarily in Latin America, Asia, Africa, Eastern Europe and the Caribbean, the Prince Claus Fund has a specific programme that aims to support the work of cultural heritage practitioners – the Cultural Emergency Response programme (CER). CER provides financial help to evacuate, stabilise or rescue cultural heritage that is under imminent threat of destruction or that has been damaged by human-made or natural disasters. Furthermore, CER supports the training of heritage rescuers (namely through the FAC training mentioned above) and the development of a network of experts that can facilitate the quick response wherever and whenever needed.

The Blue Shield international network, often referred to as the cultural equivalent of the Red Cross, is concerned with the protection of cultural and natural heritage (both tangible and intangible) in the event of armed conflict, natural- or human-made disaster. In 2003, the Blue Shield Netherlands was established and it focuses on cooperation with different organisations and institutions in the Netherlands (such as the National Commission for UNESCO and the RCE) towards the protection of Dutch cultural heritage against threats resulting from natural disasters, war and military acts, and organising national and international assistance in the event of the same type of emergencies.

For more information on the institutions, programmes or expertise mentioned in this overview, we advise you to check the respective websites or to get in contact with an institution directly.